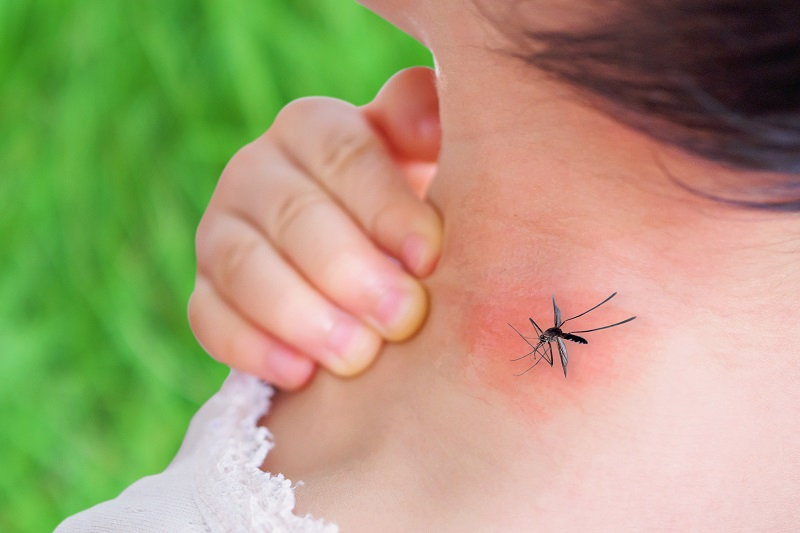 A class of arthropods with more than a million known species are the insects. Poison, saliva, other excrements or body parts of insects can trigger symptoms in humans. In our latitudes, the most common bites are mosquitoes, gnats and horseflies.

Which insect species are distinguished?

Basically, a distinction must be made between bloodsuckers and insects that use poison. While bloodsuckers cause annoying, itchy and sometimes painful stings, unlike insect venom, no systemic reactions are known. Insect venom can cause systemic reactions that can result in serious or even fatal clinical pictures. Anaphylaxis to a bee or wasp sting affects 1.2-3.5% of the general population over the course of their lives.

The following article focuses on insect bites by bloodsuckers.

Why do insects sting?

Mosquitoes, gnats and horseflies only want to get at the blood or cell fluid. The resulting itching and a possible allergic reaction are actually undesirable side effects from the insects' point of view, as they alarm us humans. Only female insects bite. The allergic reaction is caused by the insect's saliva, which is necessary for anesthesia at the injection site and for blood clotting, and on the insect itself (at implantation).

There are three possible stitch variants:

Sting with a snout: There are two tubes in the snout. A saliva is injected into the puncture site to prevent blood clotting. The blood is sucked out with the other tube. Example: Gelsen

Hole in the skin: They bite a hole in the skin, creating a small pool of blood. This is then sucked out. Example:  horsefly (gadfly)

Nesting: The insects bite or penetrate the skin. The insects do not leave the body of their victim for a long time. Example: mites, ticks

Why am I bitten by insects more often than others?

Mosquitoes and mosquitoes are attracted to the carbon dioxide in the breath, body heat, body odor and perfume. The body odor of people is very different, which is why insects attack different people differently, even in a group.

There is no reliable evidence that certain diets have a positive or negative effect on insect attraction.

What reactions are evoked by insect bites?

Blood-sucking insects can trigger local or general reactions in humans through their sting. In at least 75% of the population, the sting of blood-sucking insects leads to allergically triggered punctiform to plateau-shaped elevations of the skin (wheal or papule).

How do insect allergies come about?

The body often develops a strong defense reaction to insect bites in childhood. The exogenous protein from insect saliva causes hives in most people. How much the raised areas of skin torment people, how severe the reactions are and how long the healing process takes varies greatly.

What treatment is necessary for insect bites?

Acute insect bites are treated symptomatically. An antiallergic gel is applied or a drug to be taken orally is suggested. Antihistamines can also be prescribed as a preventive measure in order to prevent known allergic reactions to mosquito bites as far as possible.

For a comprehensive clarification of allergies, we can carry out an allergy test in our practice in Vienna. In this way, allergies can be clarified. In the event that an insect venom allergy (e.g. bees, wasps) is also present, appropriate emergency kits can be prescribed and hypersensitization can be carried out.

How can I generally protect myself from insect bites?

Cover your body with long clothing and wear long pants, especially when walking in the woods. It is better to choose light-colored clothing in summer, as dark clothing attracts insects. Avoid strong perfumes and cosmetics containing strong fragrances. Insect sprays can also help.