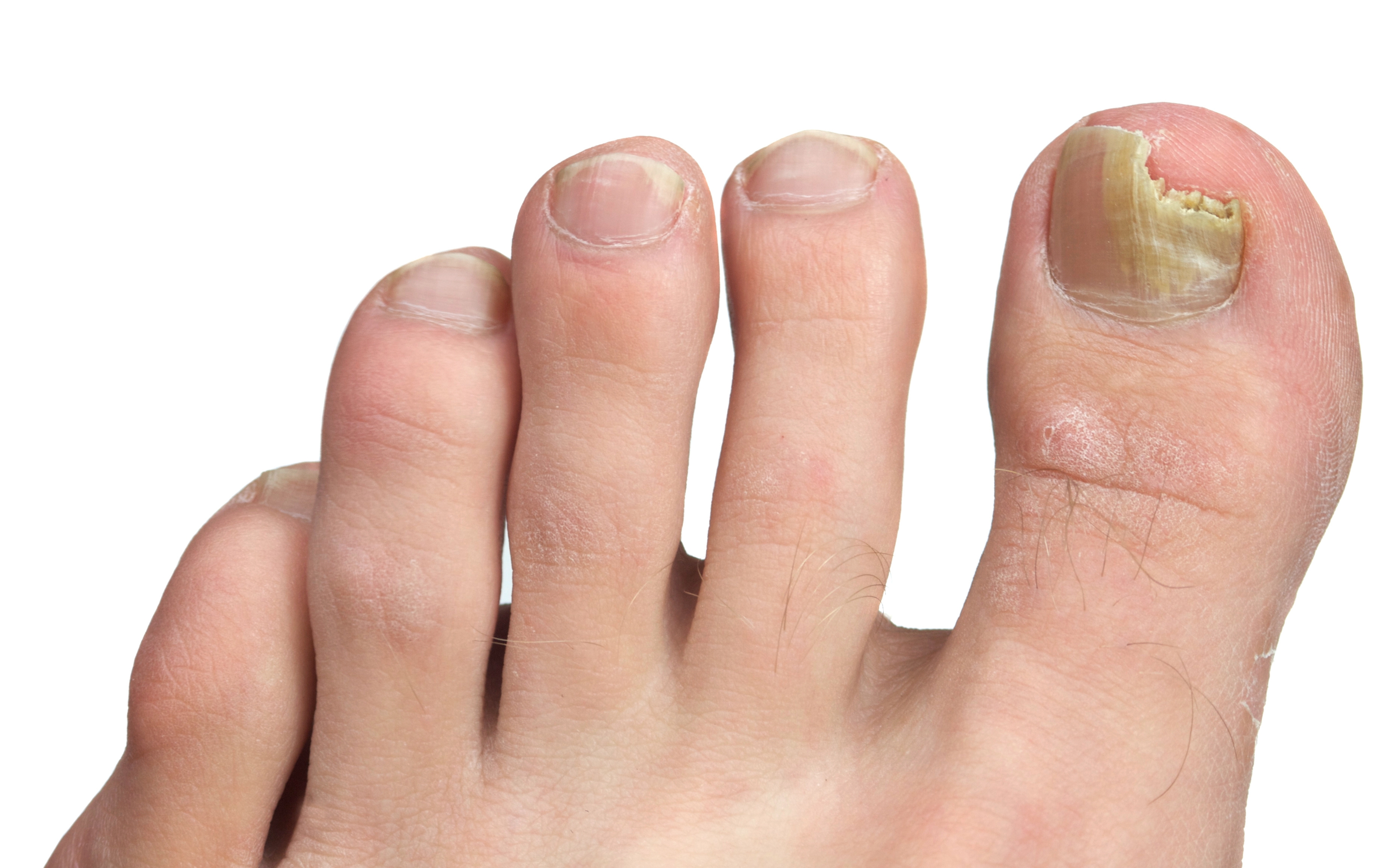 NAIL FUNGUS ON TOES AND FINGERS

NOT ONLY A COSMETIC PROBLEM.  UNTREATED IT WILL LEAD TO THE DESTRUCTION OF THE NAIL BED. The infection can affect anyone, especially diabetics and the elderly, as well as athletes and people who put stress on their feet. Since fungal infections rarely disappear by themselves, it is important that people affected visit a doctor and start with a suitable therapy. Even with proper therapy, the healing process can be lengthy.

How do you recognize nail fungus? How do you prevent the infection? More information about nail fungus can be found below.

WHAT IS NAIL FUNGUS?

Nail fungus (onychomycosis) is a chronic, progressive fungal infection of the nails. Feet and fingernails can be affected, mainly due to humid conditions and often colder temperatures. It occurs on toenails more frequently than on fingernails. If untreated, the infection could lead to the destruction of the nail plate. The infection is often painless.

As a major problem, infection with nail fungus serves as a portal of entry for other germs in the organism. There are certain risk factors that favour a fungal infection. Poor blood circulation (smoking, diabetes, old age) or nail damage (athletes, psoriasis) can lead to infection more easily. The fungal spores are present everywhere in our environment and you can quickly get infected in public areas (eg swimming pools) or from infected by relatives.

A nail fungus can develop on any nail but infections of the toenails are much more common than fingernail infections. With the toenails the infection usually begins at the big toe and then goes on to the other nails. There are several pathogens that can infect the nails. The most common are the Trichophyton rubrum and Trichophyton interdigitale. Mold or yeasts can also cause infections. Book an appointment

HOW ARE NAILS CONSTRUCTED AND WHAT FUNCTIONS DO THEY FULFILL?

Nails grow because in the growth zone of the nail root, cells continuously transform into keratinized nail cells. Here, the fingernail pushes forward approximately 1 mm per week, with toenails about 1 mm per month. Deficiencies or diseases can lead to growth disorders. The nails support the gripping function of the fingers but also protects the fingers and toes from injuries.

HOW DO YOU RECOGNISE NAIL FUNGUS?

There is often discoloration of the nail, starting from the front edge area. In the course of the disease, the nail plate becomes brittle and thickened. The surrounding skin is often reddened and the areas between the toes usually slightly moist with small tears in the skin.  Often several nails are affected. Book an appointment

HOW IS A NAIL FUNGUS USUALLY DIAGNOSED?

Because nail fungus does not heal by itself and affect other healthy nails, you should seek medical help as soon as possible. Nail fungus needs to be treated as part of a holistic approach by a dermatologist. It is also important to treat affected skin to prevent a new infection. The exact fungal species can be confirmed by a fungal culture in a laboratory. Once a fungal culture is identified after up to 6 weeks, resistance to certain drugs can be established and the ideal therapy can be initiated.

But there are also other diseases that at first may look like a nail fungus. Certain malformations or deformities as well injuries to the nail can lead to a similar picture. A common subform of psoriasis is nail psoriasis which can clinically present similar to a nail fungus.

Sometimes a nail fungus is also a first indication of a new systemic disease such as diabetes mellitus or a circulatory disorder. That is why it is important to consult a doctor when you detect any changes in your nails.  Book an appointment

Can I get the diagnosis faster?

Usually, a lot of patience is needed for an accurate diagnosis of a fungal culture. It can take up to six weeks for a result to be available from the laboratory.

With the brand new pathogen-specific method of EUROArray Dermatomycosis, this can be achieved within a few days. The findings are received promptly and therapy can be started quickly. A molecular biological method (PCR) is used here, in which one can even obtain information about the sources of infection and the carriers of the fungus (e.g. human or animal carriers). This can be an important success factor for the subsequent targeted therapy.

As the first practice in Austria, we are pleased to offer you the opportunity to know within a few days whether a fungus is present.

This diagnostic method can also be used for other fungal diseases. In this way, pathogens can be quickly identified and treated on every part of the body (e.g. fungal infections on the face).

Cost per test: € 200 (not covered by general health insurance)

WHAT TREATMENT METHODS ARE THERE AND HOW CAN I PROTECT MYSELF FROM AN INFECTION?

There are several treatment options for nail fungus. Depending on the extent of infection systemic (tablets) or topical (nail polish) therapies can be considered. If only individual nails are partially affected, local therapy may be sufficient. If a nail is completely affected, or several nails are badly affected systemic therapy is to be considered. It is important to observe drug interactions and do regular controls of blood parameters. Mostly local and systemic therapies are combined. It is important to be patient and be prepared to comply with the therapy for several months. Furthermore it is important to pay attention to hygiene, to disinfect shoes and to wash socks at 60 °C.

Podiatry is always an important part of therapy in the event of fungal nail infestation. Not only are diseased nail parts carefully removed to prevent infection of healthy nails. It also ensures that the nails can grow back well. We always recommend medical foot care as an accompaniment to the treatment of nail fungus.

There are a few simple steps you can take to protect yourself regarding possible infection:

Book an appointment in our practice in Vienna

Novel laser treatment for nail fungus as a therapy alternative

If the nail is already badly infected, laser treatment can quickly and gently provide relief. Especially for patients who do not want to receive or would not tolerate systemic therapy. In our practice we use the Laser ThunderMT (Quanta Systems), which makes the nail fungus disappear after only a few sessions.

The laser procedure promises a pain-reduced treatment, which means that no anesthesia is necessary. The treatment is quick and there is no downtime for the patient, and side effects are not to be expected. Success is clearly visible after 8 to 16 weeks. Before the treatment, a podiatry session is necessary in preparation for the laser therapy.