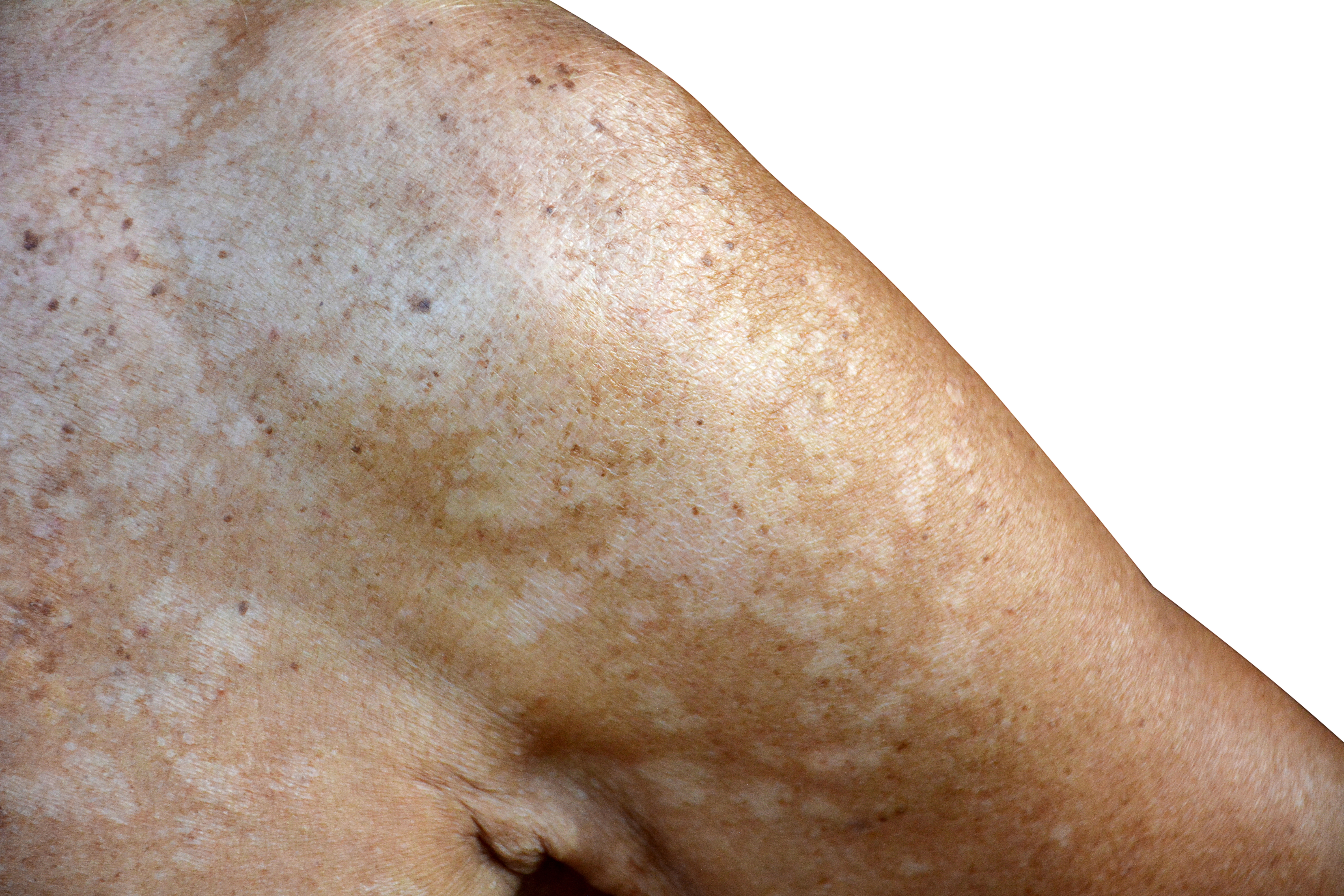 PITYRIASIS VERSICOLOR IS A FUNGAL SKIN DISORDER. MOTTLED CHANGES TO THE SKIN APPEAR, ESPECIALLY ON THE BACK AND CHEST. IT IS CAUSED BY A YEAST THAT FORMS PART OF THE NATURAL SKIN FLORA. HERE YOU WILL FIND EVERYTHING YOU NEED TO KNOW ABOUT PITYRIASIS VERSICOLOR.

What is Pityriasis versicolor?

How can you recognize it? What are the symptoms?

How is Pityriasis versicolor diagnosed?

What treatment is available?

WHAT IS PITYRIASIS VERSICOLOR?

Pityriasis versicolor, also known as Tinea versicolor, is a harmless fungal disease of the skin and only affects the upper layers. Certain yeasts of the genus Malassezia are known to cause pityriasis versicolor. They belong to the natural skin flora (microbiome) and populate human hair follicles and neighboring parts of the body such as the head.

The disorder develops when the yeast suddenly multiplies, and when left unchecked, skin balance is disturbed. That is when the yeast manages to colonize parts of the body outside of the hair follicles. The resulting skin patches occur mainly on areas that are rich in sebum, however, the shoulders, arms and neck can also be affected and can begin to itch.

Pityriasis versicolor is not contagious - not even in direct contact with someone who has it. This is because everyone already carries the Malassezia fungus on their skin.

HOW CAN YOU RECOGNIZE IT? WHAT ARE THE SYMPTOMS?

The disorder manifests itself primarily in the form of light and dark spots (hypo- and hyperpigmentation). These begin as a series of smaller spots and patches but can join together to form larger areas in more severe cases.

The Malassezia fungi can reproduce intensely forming dense colonies. At first, small, round, clearly demarcated spots appear. The color of the spots ranges from light to dark brown. It is common to observe light spots on dark skin and dark spots on light skin. This explains the term "versicolor" (multi-colored), which is created as follows:

The fungal layer does not allow UV rays to penetrate the underlying skin, which prevents the formation of the skin pigment melanin there. The fungus also produces bleaching agents, which further inhibit melanin synthesis in the skin. This creates light spots (hypopigmentation) on dark or tanned skin. Patients often mistake these for the skin disease vitiligo (white spot disease). Even after the fungus has been treated, the light areas remain visible - until renewed exposure to the sun.

On the other hand, on light skin the lightening is not noticed, and the fungus becomes visible through the formation of its own pigments, which manifest as reddish-brownish skin lesions.

You can often see fine, bran-shaped skin flakes on the affected areas, hence the alternative name: "bran fungus". The infection is sometimes accompanied by mild itching.

Book your appointment in Vienna here

Pityriasis versicolor is caused by certain yeasts, especially those of the Malassezia species (e.g. globosa or furfur). These fungi are found in all healthy people and, together with other microorganisms, form the normal skin microbiome. Various factors can cause them to multiply excessively, which disrupts the balance of the natural skin flora.

- increased sebum production of the skin

An increase in the severity of the disease can be observed in the summer months.

HOW IS PITYRIASIS VERSICOLOR DIAGNOSED?

To rule out other diseases such as vitiligo, a consultation with a dermatologist is recommended. Pityriasis versicolor is usually determined by visual diagnosis. In some cases, a culture or sample biopsy is required.

WHAT TREATMENT IS AVAILABLE?

Fortunately, pityriasis versicolor is neither dangerous nor contagious, but very annoying for those affected. Treatment involves the use of antifungal agents (antimycotics), whereby a local application (as a cream, shampoo) is usually sufficient.

In very severe cases, when the local antimycotics do not have the desired effect, a one-week oral treatment can be used. In this case it is important to note that blood values and existing medication must be considered to avoid any unsafe interactions.

In summer it is recommended to wear clothing that is as breathable as possible (e.g. made of cotton), which absorbs sweat well. Synthetic fabrics should be avoided as they are hardly breathable. For patients who frequently suffer from pityriasis versicolor, regular local use (e.g. once a week) of antifungal shampoos (often containing selenium salts) can be prescribed.